In the summer of 2016, the Jackson family reached its wit’s end: Their home in Battle Ground, Wash., a little over 10 years old, experienced a third pipe leak in just a couple of years.

The first failure appeared as a leak in the PEX piping under the dishwasher, which destroyed much of the kitchen and was trickling into the basement. The insurance company covered what would become a five-month renovation. New PEX pipe replaced the failed PEX.

The second failure revealed itself through water collecting in the basement. A search showed that the leak was not at the dishwasher this time; plumbers believed they found it near the garage, this time the suggested culprit was a nail through the pipe.

But during that second repair, yet another failure was discovered. The homeowners were at a loss. “Someone would try to fix something and then there would be another one and another one,” recalls Rick Jackson, M.D.

“It was really frustrating that we were having repeated leaks,” adds Janine Jackson. “What do you do with something like that? I didn’t even know what the options were.”

At some point during the process, Dr. Jackson mentioned the problems to Jeff Ramey, a piping systems consultant for Lubrizol, who went to the Jackson home to investigate. What he eventually found was something more concerning than one-off leaks caused by a piece of faulty pipe or human error, but rather widespread cracks and breakdown in the PEX pipes.

To avoid more leaks and water damage in the future, the Jacksons opted to repipe their entire home. A crew of three from Waterways Plumbing, based in nearby Vancouver, Wash., performed the repipe over the course of a day.

Upon complete removal of the damaged PEX system, there was evidence of breakdown along the hot water lines of the PEX pipe, revealed in short, discolored cracks and ink permeating through the pipe. Even the new pipe was showing damage after just two years. 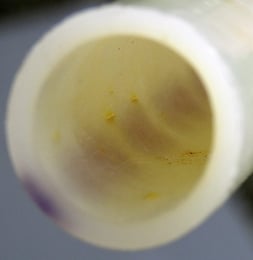 Hot water piping installed in the Jackson home in 2005 shows chlorine degradation and permeation of print line through the wall of the pipe.

Lab testing revealed that the failures of the PEX were consistent with chlorine degradation. Chlorine degradation of PEX occurs when the chlorine in drinking water, which is added to keep it clean and safe for human consumption, attacks the PEX piping, breaking down molecular bonds, resulting in micro-cracks that gradually expand to the point of a pipe failure. Because of this, PEX piping includes chlorine-neutralizing chemicals that are intended to extend the life of the pipe.

While PEX is tested for resistance to chlorine, there are several factors that increase the risk of chlorine failures in PEX, including elevated temperatures and pressures, exposure to UV rays from the sun or fluorescent lights, and local water conditions.

Because of these factors, the test currently used to determine chlorine resistance of PEX specifically states that the results “do not constitute a representation that a PEX tube or system ... will perform for that period of time under actual use conditions.”

While the exact combination of water conditions, UV exposure, temperature, and pressure are not immediately clear, it is highly likely that local conditions would have continued to cause failures in the PEX pipe at the Jackson home had the system not been fully replaced.

The Waterways crew replaced the PEX piping system with FlowGuard Gold CPVC. Compatible with high temperatures and all levels and methods of chlorination used to ensure clean, safe drinking water, FlowGuard Gold provided the Jacksons with the assurance that the days of PEX pipe leaks and repairs are firmly in the past.

The repipe process “was absolutely remarkable,” Dr. Jackson says, noting that the one-day process, plus a few more to finish drywalling access points, was a relief following the extensive renovations they had already endured. “Waterways was truly easy to work with.”

More importantly, the family is confident that its water issues are behind them. “Without talking to Jeff I didn’t even understand the concept of failing pipes,” says Dr. Jackson. “My father, grandfather, and uncle were builders, but I’d never even been aware of a plumbing failure situation. This was something not even on my radar.”

Following the repipe, “Everything is working beautifully,” Dr. Jackson says. “We’re so grateful that we ran across a type of pipe and a company in FlowGuard Gold that’s able to help the homeowner and the plumbers understand the best way to install the right kind of pipe. With FlowGuard Gold CPVC, I can truly have peace of mind about my plumbing system for a long time.”