When a new facilities manager started work at the Oquendo Center, a hands-on veterinary training facility in Las Vegas, he quickly got in touch with Frank McCourt at Jenni Plumber to discuss some potential issues he discovered.

One problem in particular: The center couldn’t get hot-enough water to its sterilizer to ensure proper operation.

The design/build project quickly became one of Jenni Plumber’s most challenging to date.

The team installed a tankless water heater that was able to increase water temperatures to the required 185 degrees. But due to venting requirements and the fact that the mechanical room where the sterilizer is located also houses temperature-sensitive equipment, the water heater had to be located in another room, across a corridor and 30 feet away.

The high temperature of the water immediately made the use of some plastics, such as PEX and polypropylene, questionable. In addition, the building’s reverse osmosis water was extremely aggressive, which meant copper was also not an option.

That left stainless steel and CPVC. Stainless steel was more cost-prohibitive, which was one factor in the final decision. But what truly turned the tide in CPVC’s favor, McCourt says, was the support he received from his distributor, Dan Jernigan of Harrington Industrial Plastics, and his Corzan representative, Bob Ard. Jernigan has been selling Corzan CPVC for several years, and helped McCourt determine what specs were needed to eliminate stainless steel from the project while managing both the water issue and the layout challenges.

“We’re seeing a lot of movement toward Corzan right now because of corrosion problems with metal,” Jernigan says. “There’s always been a niche market opportunity for a product that’s universally accepted for temperature and corrosion resistance; Corzan fits that mold.” 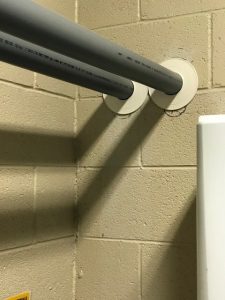 McCourt core-drilled through the corridor’s block walls, installing 3/4” Corzan CPVC pipe inside a 2” sleeve designed as a failsafe; elsewhere, the pipe was insulated with Thermacel. To accommodate expansion and contraction, the layout included two expansion loops. 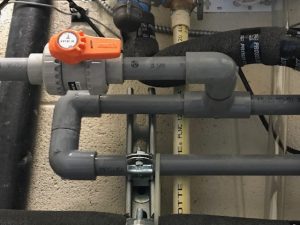 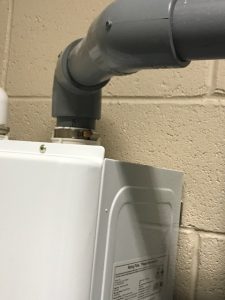 McCourt had used CPVC in previous projects, but never one as challenging as this. “It turned out fantastic,” he recalls. “It does exactly what it’s supposed to do, with no compromises. The facility director is thrilled as well. He’s the one we had to please.”

Adds Jernigan: “It’s running like a champ, and we have a customer for life now.”

Have challenges you need solved? Contact your Corzan representative today.