Lower Cost, Proven Reliability
The W Hotel and Residences, consisting of two 23-story towers atop three pedestals, faced significant delays during construction due to permitting and redesigns. When the project finally moved forward in 2005, the cost of the copper piping specified had increased by several hundred percent.

“When the contractor suggested we look at other materials, CPVC was the first choice because we were already familiar with many of its benefits, including its corrosion resistance, noise reduction and, of course, its tremendous cost savings,” said Mike Torrey, head of the plumbing department at Steven Feller P.E., Inc.

Driving the decision to substitute materials was mechanical contractor Fred McGilvray, Inc. “My preference would be to use CPVC a lot more often because of its cost and labor benefits,” Project Manager Bill Brooks said at the time. “The engineering firms would probably specify it more often if they were more familiar with it.”

“After reviewing all of the technical data, we decided that Corzan® and FlowGuard Gold® CPVC were smart alternatives,” said Torrey. “And of course, the hotel’s owner didn’t have a problem with the change, especially once he saw the new budget numbers and heard about the product’s successful track record.”

Ten years later, the move has proven to be a good one for engineer and customer alike. “The Corzan and FlowGuard Gold CPVC we specified for the W Hotel 10 years ago have performed well and have had no problems or issues,” said Torrey, who is still with Steven Feller P.E. and continues to oversee the completed hotel. “In fact, we have specified CPVC piping on numerous projects since then. As with the W, the piping systems have proven to be a reliable option.”

Oceanfront Oasis
Located on a 4 ½-acre site on Fort Lauderdale Beach, the $220 million W Hotel and Residences comprises a 346-room hotel in its East Tower and 171 luxury, one- and two-bedroom hotel condominiums in its West Tower. The property includes two heated swimming pools and a luxurious 10,000-square-foot destination spa and fitness facility.

Torrey’s firm already had experience with FlowGuard Gold CPVC pipe and fittings for a number of other low- to mid-rise condominium projects less than 20 stories. But the W marked the first time the company had specified Corzan and FlowGuard pipe and fittings for a large high-rise. The piping system was ideal not only for the branch lines, but also the demanding requirements of the risers.

“We had always used copper in the past on projects over 20 stories, because we were unsure if CPVC could handle the higher pressures,” he said.

Working with his Lubrizol field representative and technical department, Torrey and his team learned that CPVC pipe and fittings routinely handle pressures of 250-350 psi and above. FlowGuard Gold pipe is produced (1/2" through 2") in SDR 11 dimensions with CTS (Copper Tube Size) outside diameters. SDR, or Standard Dimension Ratio, means the wall thickness is directly proportional to the outside diameter. This results in all diameters carrying the same pressure rating of 400 psi at 73°F. Corzan pipe is produced in schedule 40 and 80 systems with IPS (Iron Pipe Size) outside diameters. This results in the pressure capability varying with the size of the pipe. For example, 8” Schedule 80 CPVC pipe is rated for continuous service of 250 psi at 73°F while 3” schedule 80 CPVC pipe is rated at 370 psi at 73°F. All CPVC pressure ratings incorporate a safety factor of two. 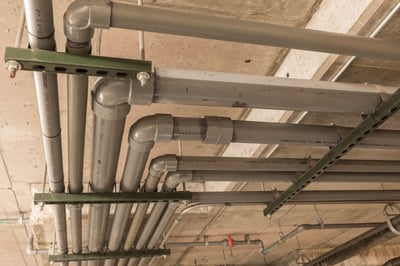 Along with material costs, the use of CPVC provided labor cost savings, as well: Torrey estimated labor time to be about a third of what a typical copper installation would have taken as a result of the faster, easier installation process. Unlike copper, CPVC does not require soldering; instead, a solvent-weld method creates a reliable bond within minutes. “Our contractors really liked the fact that they didn’t have to solder, because that eliminated a major fire risk and other hassles,” said Torrey. “We were immediately attracted by the reduced labor requirements. That was years before copper prices started going through the roof. With current prices, the material savings afforded by switching to Corzan and FlowGuard Gold CPVC are amazing.”

Although cost savings was the initial attraction for switching to a Corzan water distribution system for Torrey, he soon realized a number of other benefits over copper. “Noise is really no longer an issue, because CPVC is more forgiving,” Torrey explained. “It actually absorbs water hammer.” An NSF International test, in fact, confirms that FlowGuard Gold CPVC piping systems are actually four times quieter than copper piping systems. 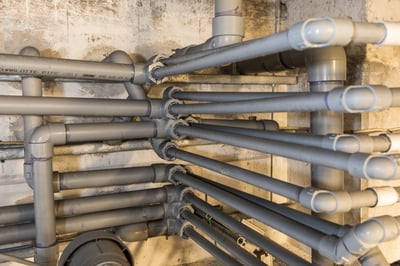 Corrosion resistance is another major advantage of using CPVC. Although the problem is not as severe in southeast Florida, Torrey is quite familiar with its damaging effects on copper pipe in projects located in northern Florida markets, especially Jacksonville.

“I see a lot of potential with this product, especially because of its ease of installation,” said Torrey. “As engineers, we look for inventive methods and solutions to maintain the integrity of the design, comply with applicable codes and work within specified budgets. The Corzan and FlowGuard Gold CPVC plumbing systems fit well within that philosophy. They definitely are a part of our future.”