Backed by Lubrizol Corporation's 60 years of experience with chlorinated polyvinyl chloride (CPVC), Corzan® Piping Systems is trusted by the most demanding industries.

A Heated Situation Air conditioning and Arizona go hand in hand, except when an owner neglects preventive maintenance for decades. The new owner of a 240-unit Phoenix apartment complex plagued by unreliable A/C due to persistent leaks in the HVAC system had a big problem on his hands. 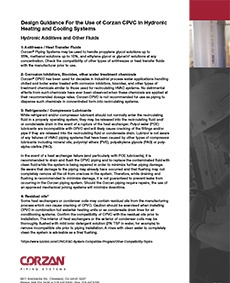 The transformation of San Diego’s North Embarcadero waterfront into the Portside Pier development was a joint project by the Port of San Diego and its restaurant partner Brigantine. Pacific Building Group (San Diego, California) was selected as the general contractor to oversee construction of the new concrete piles and a concrete pier with a two-story framed structure atop it, housing four dining establishments. For the hot and cold domestic water supply to these restaurants, the plumbing specification called for piping to be below the pier, and for this piping below the pier to be corrosion-resistant CPVC ranging from 3" down to ½".

To accommodate the influx of conference attendees visiting the new Birmingham-Jefferson Convention Complex (BJCC), a major hotel chain started construction of a new, $50 million hotel. Built nine stories high with 290 rooms, city officials were deeply invested in its progress and success. Hotel decision makers were committed to making sure the hotel was on budget—and opened on time. Their dedication influenced every aspect of the project, including project design, construction, and installation of plumbing systems.

Over the past few years, Shands Hospital in Gainesville, Fla., has been expanding dramatically, with the addition of cancer treatment center and a cardiovascular and neurological services center. But less visible have been some key renovations to the existing 35-year-old hospital tower, a 1-million-square-foot general care facility with 600 medical and surgical beds, that are just as vital to the facility’s ability to conduct quality patient care.

When a new facilities manager started work at the Oquendo Center, a hands-on veterinary training facility in Las Vegas, he quickly got in touch with Frank McCourt at Jenni Plumber to discuss some potential issues he discovered.

For the owner of the Hilton Garden Inn® franchise in Romulus, Mich., every detail involved in the construction of the hotel had to provide premium quality for its guests. According to Webb Meyers, director of construction and renovation for Cooper Companies, Memphis, Tenn., their goal was to build a premium business travel destination leveraging and maintaining the long-lasting reputation of the brand.

When the new cardiovascular neurological services hospital opens in northern Florida in late 2017, it will include some of the most advanced healthcare and technologies, along with some of the industry’s most well-known practitioners. What won’t be visible are the high-tech materials behind the walls that ensure the facility provides safe, reliable water supply that is so essential to day-to-day operations and care.